Electric Cars don’t seem to catch a lot of attention again in the automobile tech space, but trust me, an all-electric race-car would

Electric car concept has literally changed the definition of automobile production, and while there has been a lot of focus on cars and trucks, a majority of the brands may have failed to make plans for race-car, probably because it does the heavy duty job. However, there seems to be a change in the narrative already, as the German automobile boss has finally taken a bold step by revealing its first all-electric race car.

Mercedes-Benz has pulled the veil off its latest four-wheel drive, and it is an all-electric racecar- the first of its kind. This happened on the eve of the Geneva Motor show, and it already looks like it is the best thing that will happen during the event. The All-EV racecar looks a lot like a dubbed version of the EQ Silver Arrow 01, which is a nod to the automaker’s flashy electric concept racecar, it’s what Mercedes-Benz will use to compete in EV racing series Formula E starting at the end of 2019.

Formula E was launched in 2014 as an all-electric alternative to Formula One and other gas-powered motorsports. What started as a relative novel idea (other attempts had been made at electric racing, though almost none succeeded) has flourished into a sport with a legitimate, if modest, following. The series is currently in the middle of its fifth season, and it already pits a bevy of high-profile automakers against each other every month, including Audi, BMW, Nissan, and Jaguar. Porsche is also set to join the series starting next year.

Mercedes has earlier confirmed that it will be participating in the Formula E back in 2017, and while the automobile brand has vouched to return into the game strong, the new All-EV racecar may just be its answer to its previous promises. Benz will take over a team that is already running in Formula E called HWA, which should help give the automaker, the reigning constructors’ champion in Formula One — get a running start. In fact, HWA used to run Mercedes-Benz’s racing team in the Deutsche Tourenwagen Masters (DTM) racing series, which the German automaker left last year in favor of Formula E. 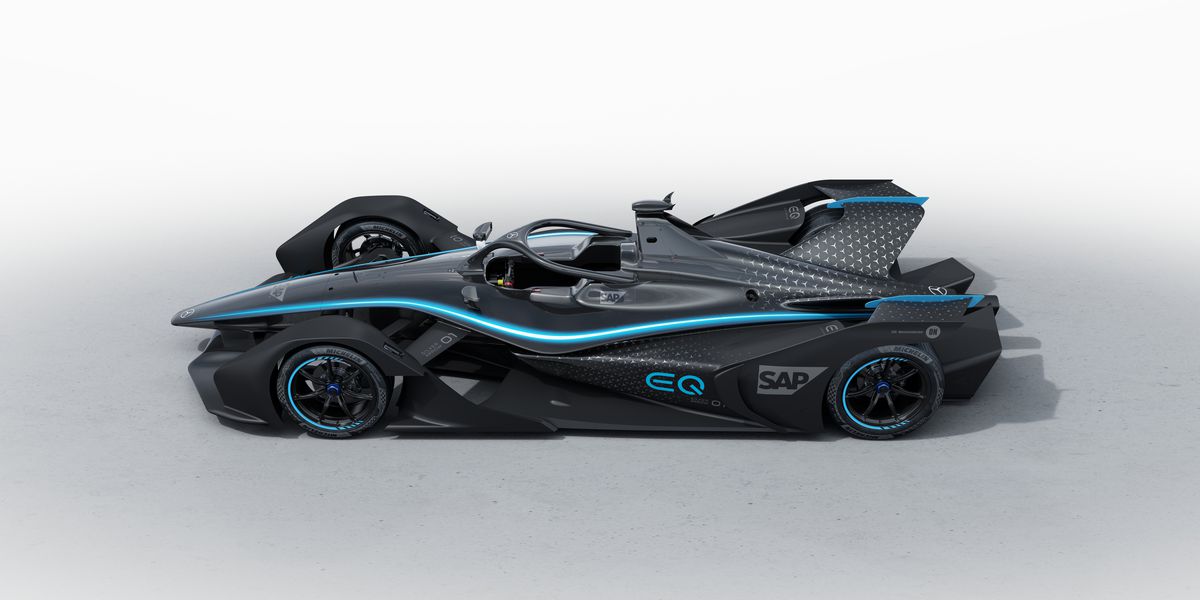 The EQ silver, as the racecar is been named, is not a full work of Mercedes Benz, although, the company also played an important role in the development. Formula E tasked French and Italian outfits Spark and Dallara with building the chassis. Atieva (which is the battery company arm of EV startup Lucid Motors) built the 52kWh battery pack using Sony cells, and it was integrated by McLaren. All told, the large spec car can generate up to 340 horsepower, go from 0 to 60 mph in 2.7 seconds, all with a weight of nearly 2,000 pounds. However, automakers in Formula E are allowed to develop their own drivetrains, including the electric motor, gearbox, and inverter — basically, everything that connects to the battery. The series claims this provides automakers with a tested for developing electric propulsion technology.

Mercedes informs that the car that will be showcased at the Geneva Mtr Show is only a ‘teaser livery’ which is supposed to mean that, it is still open to corrections, hence, come Season six of the Formula E, one should not be too shocked if perhaps a slight change is sighted, especially with the paint job. However, it is also cool to know that the brand has little or nothing at all to change about the EQ.

“Formula E is going to be a completely new playing field for us,” Toto Wolff, the head of Mercedes-Benz Motorsport, said in a statement. “But we are looking forward to the challenge of demonstrating the performance of our intelligent battery-electric drives in motorsport and of giving a positive boost to the EQ brand,” Toto added in conclusion.