Microsoft held its annual surface event yesterday, Wednesday, 2nd of October, where it introduced the company’s latest products line while marking another re-entrant into the smartphone world

As expected of the America-based Microsoft, it was all shades of surprises at the annual surface event yesterday, where the software giant debuted its new line of products which have long been subjected to various leaks and rumors.

Now the company’s announcement has rather re-affirmed some of the leaks which eventually turned out to be genuine,  while others came as a surprise, especially the fact that the company officially made yet another entrant into the mobile world with the new Surface Duo. Oh I just mention the biggest surprise at the event, well there are still more surprises to be shared in this article, but then, I will rather make a full list of everything that was announced at the event yesterday, and then you can pick out your own surprises.

Below are all the products that made it to the limelight at yesterday’s event:

The event opener, and an apparent successor- the Surface Laptop 3 shares a lot of similarities with its predecessor, the Surface Laptop 2 which also packs the same 13.5-inch display as the new AMD-Powered model, although the event also saw a larger edition that is 15-inch in size. As you would expect, it, however, comes with a major overhauling, especially with respect to in-built specifications, which include the latest 10th-gen Intel Ice Lake Core processor.

The new laptop also comes with a refined fast-charging capacity, USB-A, as well as a USB-C port. Not just that, you can also expect to see a serviceable chassis and a far-field microphone to aid voice recognition. You can expect the new PC price to start at $999 for the 13.5-inch variant and $1,199 for its larger edition.

The Surface Pro comes in two versions- Surface Pro 7 and Surface Pro X. Both are Tablets as you would expect, however, each comes with its own peculiarity. 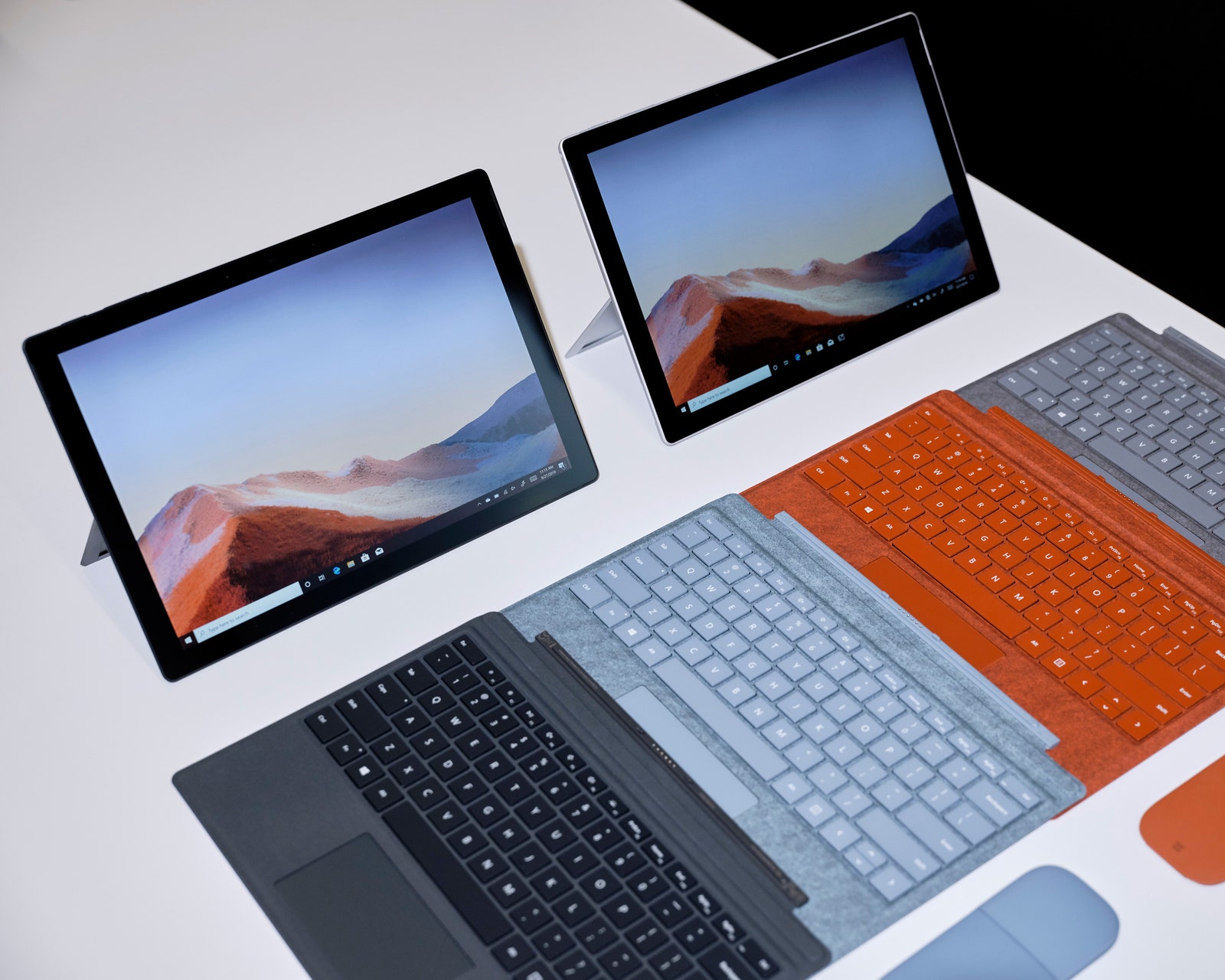 The S-pro 7 is another addition to the traditional surface pro-family, and the latest flagship in the line embraces new updates as well. It comes with the latest 10th-gen Intel chip, USB-C (Plus USB-A) as well as a more powerful mic like the Surface Laptop 3. It seems like the company has finally decided to dedicate more attention to its voice recognition software as virtually all its latest products come with similar enhanced features. The starting price for the S-pro 7 is $749 and is expected to ship the same time with Surface Laptop 3, by October 22nd.

The S-pro X, on the other hand, is a new entrant in the Pro-line, and it comes with a mobile chip inside of its 13-inch body. Also, unlike the regular surface Pro, the S-pro X comes with a blend of the company’s two-in-one tablets, while operating on a custom Snapdragon-influenced SQ1 processor that is suitable for the slim feature of the device.

The S-pro X also allows for a detachable wireless keyboard like the Pro 7, although in its own case carries an extra space for a slim pen that charges via the tablet’s keyboard cover. It is expected to arrive by November 5th and will start at $999

While the surface earbuds also fall in the hardware product line, it marks the company’s second revision of the wireless earbud, although this time around, the company’s new set of buds are the truly wireless type, joining the bandwagon of wireless buds in the outside world. Not to mention the weird look possed by the new buds, it is a total deviation from the usual style we all are familiar with.

Like I stated, the Surface Earbuds are true wireless, and as a result, comes in a portable case that also doubles as a power bank for the wearable. The buds are gesture-enabled, allowing you to be in charge of some basic control. On that note, it enables native Spotify control and Office 365 tie-ins. At that, it can automatically caption what you’re saying in a PowerPoint presentation, among other capabilities. As for the pricing of the wearable, Microsoft told that it will start from $249, and shipment will commence during the holiday.

Ok! so this is the best part of the leak that took the internet by surprise days before the Surface Event was eventually held yesterday when the leak was apparently confirmed. Yes! Microsoft now has a dual-screen device that shares similarities with the Samsung Galaxy fold that was delayed from launching mainly because it couldn’t make it past the first test. 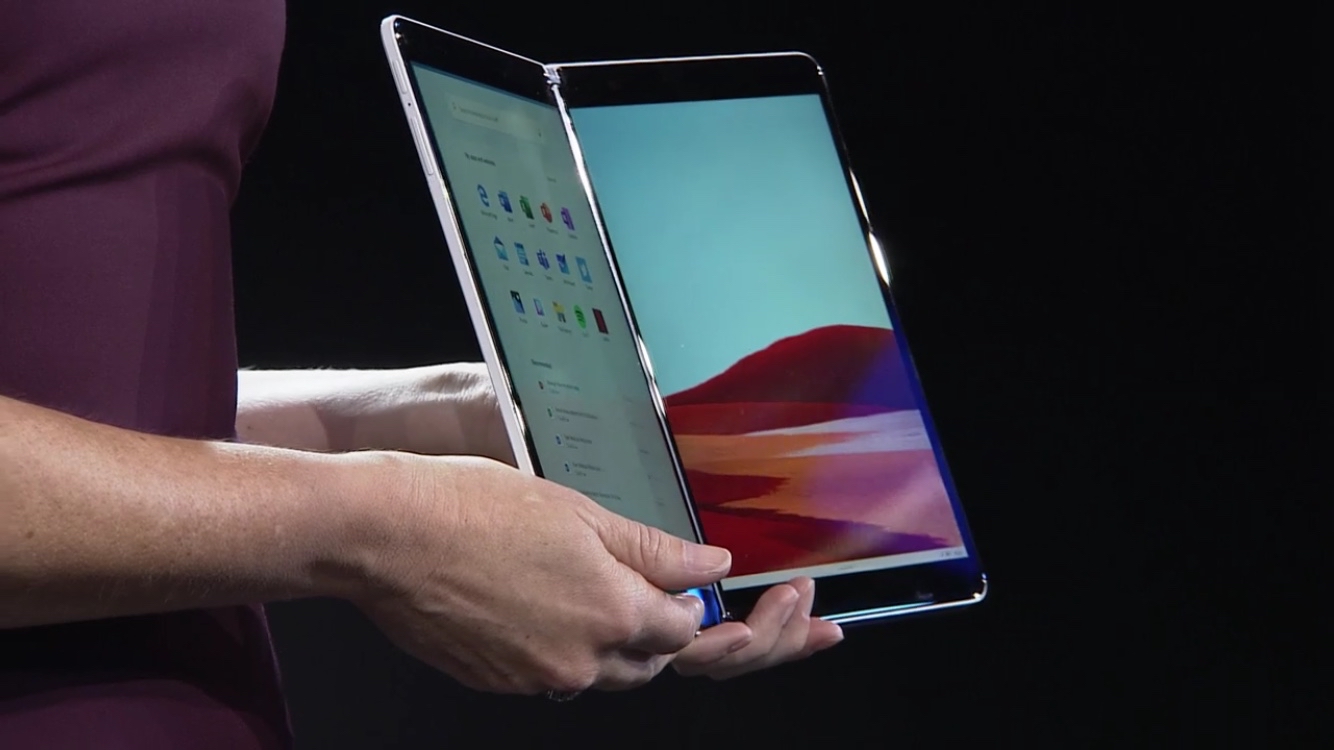 The Surface Neo in its own case is not completely the perfect foldable devices as you would expect, as it rather comes with a combined 9-inch screen and not a single foldable display as in the case of the Samsung Galaxy Fold, although when combined, makes for about 13-inch of the surface area. That been said, it doesn’t lack in its dedicated multitasking functionality as it is specifically built for that purpose.

Also, if by chance you get bored of the digital keyboard- the Neo is also compatible with a wireless charging keyboard that effectively turns the Neo into a Laptop that shares a similar look with Asus’ latest Zenbook Pro that also packs a dual-screen. 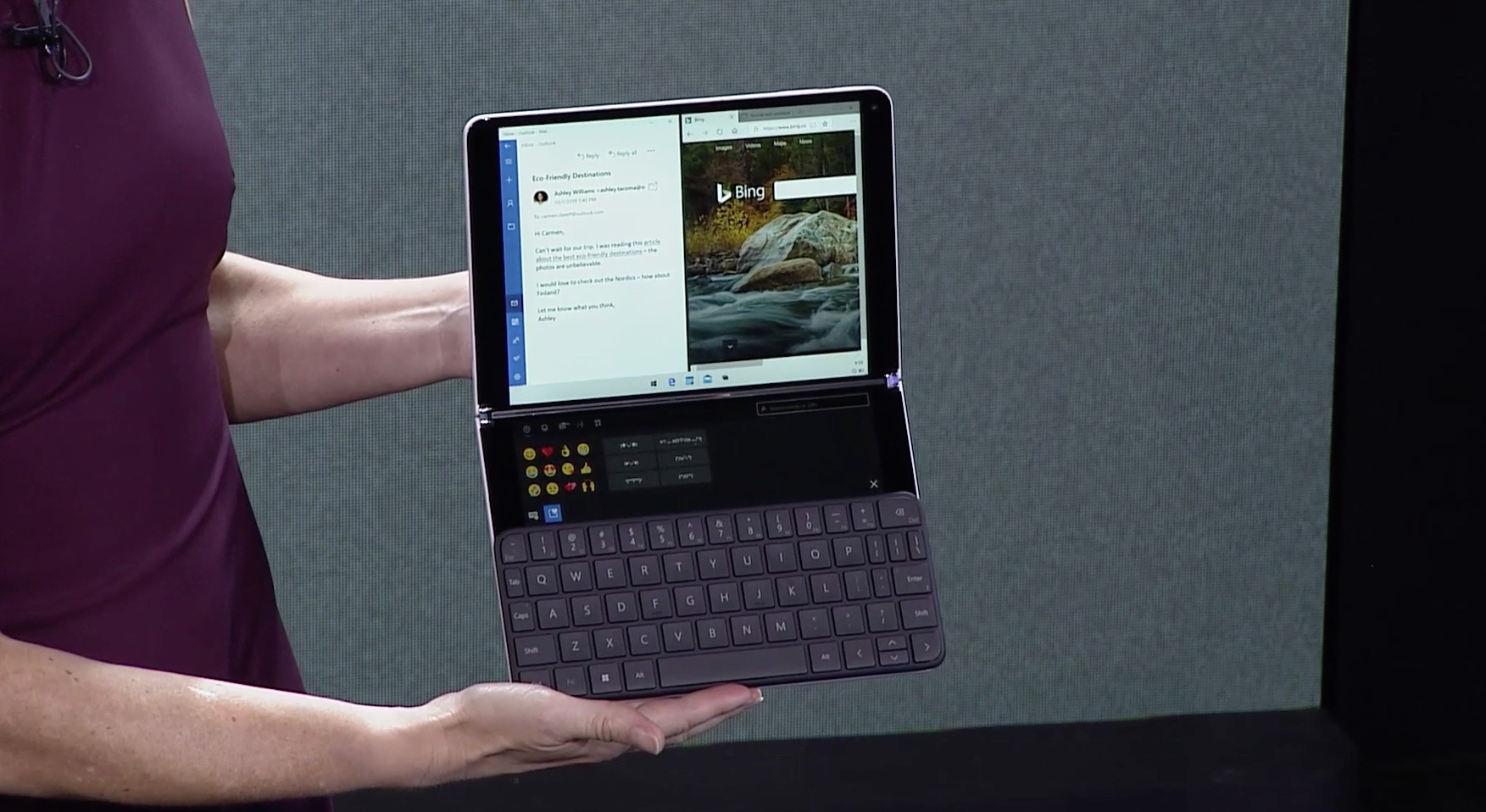 One more thing, the Surface Neo is teased to be the first device to make use of Intel’s Lakefield processor, and at that will be the first flagship on which the company’s latest OS- Windows 10X, will be debuting, before it further rolls out to other products with dual-screen. This particular device has no price tag yet, however, it will take time to reach potential owner as its shipment is due sometimes during the holidays of 2020.

Like I initially stated, the Surface event saw the announcement of both hardware and software, and at that, Windows 10 X happens to be the only one real software that debuted at the event, and of course, it was worth the hype. Though, prior to the event, a random leak suggesting a new Windows Operating System surfaced less than 24 hours to the event, so it wasn’t the biggest surprise as it was meant to be.

Microsoft coined the new OS specifically for dual-screen in the time that the numbers of PCs with multiple display feature is on the rise. Just like the Surface Neo that is built purposely for multi-tasking, the new Windows 10 X is considerably more efficient than standard Windows and sports an interface optimized for dual screens, including more elegant app placement and a more touch-friendly Start menu. It’ll arrive alongside the Surface Neo and other dual-screen PCs in fall 2020.

The Las although, not the least of the product that was introduced yesterday is the Surface Duo. As I said, the software giant has chosen to re-ignite its flare for smartphones, and as such debuts the Surface Duo to mark its re-entrant into the mobile world after a temporary disconnect. The Surface Duo will run Android across two 5.6-inch screens that provide a total of 8.3 inches of space for multitasking or comfortable thumb typing. It can fold 360 degrees to help you take a phone call, too. The Snapdragon 855 currently inside is powerful enough at the moment, although it may feel old if it’s still in the finished Duo shipping in holiday 2020