“The young shall grow” is certainly not the same as “the young shall grow to become outstandingly great”, however, the second phrase absolutely defines Alibaba throughout the course of its 20 years of establishment

By now, it is no longer news that Alibaba recently celebrated the second decade of presence and survival in the e-commerce business, alongside the retirement of the now-former CEO. Of course, it was an unforgettable moment at the Alibaba Group Holding Limited in Hangzhou, China on the 10th of September where the company CEO, Jack Ma, alongside other executives and employees celebrated 20 years of establishment which also doubles as Jack’s 55th birthday and retirement ceremony. 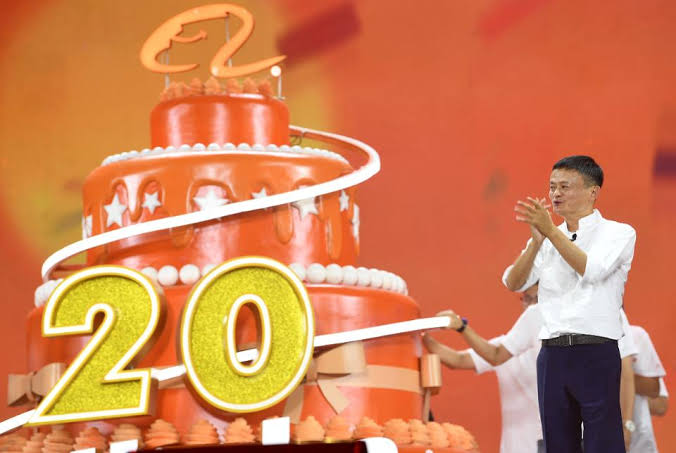 With a stadium filled with over 60,000 employees on the occasion of the Company’s 20th anniversary, it is quite easy to tell how impactful Alibaba had been in people’s lives over the years, and to think that the joy is not limited to the employees alone, but to many clients among other random individuals around the world is quite impressive.

On the day of the occasion, the now-former CEO had stunned the party in a bejeweled leather jacket, obviously looking like a rock star, and that way, leaving an iconic presence in the midst of thousands of people that were present to grace the event. Trust me, you wouldn’t believe Jack was apparently retiring as CEO, as he wore a look far younger than his actual age. Also, lest I forget, Jack didn’t just appear like a rock star but also performed as one using an orange guitar, while singing to cheering crowd. He was, however, not alone during the performance, as his successor also joined in the most-anticipated act of the night.

Jack Ma's performances at Alibaba's annual parties are among the most-anticipated acts of the night. And when Daniel Zhang joins in, that just makes it extra special. Check out their version of "You Raise Me Up" at the company's 20th anniversary celebration. pic.twitter.com/IFMR6v059I

While his performance was just a phase of the event, several other performances were sighted at the event. Of course, goodwill messages about the company and the outgoing CEO was a chant of melody from various personnel, some of which include top executives of the company, and particularly, the incoming CEO, Daniel Zhang, who was responsible for coming up with the idea for the company’s Singles’ Day shopping festival.

Jack Ma did prepare a very long speech for the Night, and as you would expect missed with a lot of emotions. During the speech, he told about the unknown struggles on the path of “becoming Alibaba” which include stories of his many failed attempts and successes. Below are snippets of his entire announcement during the ceremony.

“I was very touched by the performances on the stage just now. I really didn’t expect the day [of stepping down] that I’ve been waiting for over 10 years would come so soon, and so nicely. This is thanks to everyone that has helped the company grow, all of Alibaba’s employees and friends, the great era, the country, and this incredible city! I found people at Alibaba are becoming so good in terms of holding events—it might be difficult to find another company that can do big events so professionally like us. Lots of people thought Alibaba was a company focused on holding performances, but this is in line with our company values: we work hard, and play hard.This kind of celebration has been held for 18 years, I hope we will bring the world more excitment when Alibaba celebrates its 30th birthday…”

About the journey so far

“…15 years ago, we set the target for Alibaba to be able to last for 102 years, stretching three centuries. I have since been thinking: how could we achieve this? Lots of people treat company targets just as empty slogans, however we at Alibaba know we need to have faith in this goal to make it become reality. We went to lots of other companies to investigate how to keep a firm alive, and found there were two basic ways: one is to pass on the business to the founders’ next generation, or to find professional managers. But we chose the third path, which is to nurture our own team, and make sure the succession process is smooth with the help of system and culture. That is why, I have been preparing for 10 years for today….

About his decision to step down

….The decision [to step down] is not something I came up with a sudden impulse, nor was because I was under any kind of pressure. There have been rumours online saying I was afraid of something. People at Alibaba are never afraid of anything. We only have respect for the future, but not fear….

….Today does not mark my retirement, but rather the beginning of the succession scheme at Alibaba. Today is not about a personal choice, but the success of the company’s system. The world today is experiencing lots of fundamental changes that have been affecting everyone. Challenges arise from globalization, anxieties caused by new technologies and trade tensions between China and the US, as well as the worsening natural environment, these are all delivering one signal: which is that a new era is coming soon. All the pains and confusion we have today, I reckon they are just temporary problems we have….

About the Future of the company

….In the future, there are three major goals technology should address: sustainable growth, inclusiveness and benefit others. If technologies could not achieve these goals, then the world will just become more chaotic. All the pain, however, can only be resolved by changing oneself, not through changing others. Lots of people say I always look at things from a very broad perspective, from the perspective of the whole humanity, but I didn’t do that intentionally….

….Our generation is the luckiest generation ever. Our generation has the longest period of peaceful time, as well as experienced things like the Cultural Revolution and some magnificent reforms. We witnessed the achievements from the industrial time, but we also face the challenge of entering the data-driven era. We have been experiencing two eras, how could we not find it painful? But only having those feelings would not help, we need to change ourselves….

In the 21st century, no matter what kind of a person you are or what institution you work for, kindness is the strongest power. There were lots of people saying I had really good luck, but actually the mistakes Alibaba made were no fewer than other firms. But we’ve also made many right decisions, mostly because we did not make them purely out of business considerations. All the critical decisions we made in the past 2o years were not about money….

….China has a really good chance. Not many countries have such a huge population, unified business infrastructure….The biggest opportunity lies in China’s domestic demand. As long as the demand develops well, not only the Chinese economy, but also the global economy could be lifted. However to spur the growth of this demand relies not on government measures but rather a market-oriented economy…

About His Perspective about chinese, its people, and commercialization

….Today, we Chinese people are highly confident. However the world views us in a different light. It is afraid of China, our technology and our strong companies. I think technology should be good, bringing people hope rather than desperation. I also hope Alibaba can partake in the new wave of globalization in the future, helping companies worldwide to sell their goods and give them financial support….

…..I once had chance to visit the Royal Observatory, Greenwich. And I could not find the sun or the earth in the whole Milky Way…at that exact moment I started to feel: We are just nobody…There are so many things in the world that I’d like to experience, and there are also so many not so nice and right things that I would also like to tackle….

On His Retirement, Jack Ma said in conclusion that;

…..I quit the CEO role in 2013, but I didn’t expect to be even busier for the past six years than before I quit. Quitting the role as chairman, likewise, does not mean I am retiring. I will not stop, and Alibaba is just one of my many dreams….

……There are many more places that I’d like to visit, while I would like to do more in the fields of education, environmental protection and public welfare ..

…After today, I will start a new chapter of my life. As a person that loves liveliness as much as me, I would not want to retire and leave the playground at such a young age. I just want to switch to another universe to have fun. Just as the mountains stay lush and water keeps flowing, we are bound to meet again some time in future!