Tech’s biggest four companies; Google, Amazon, Apple, and Facebook were arraigned in a congressional hearing that has to do with anticompetitive practices

Appearing before the House Antitrust Subcommittee, the CEOs of the four tech giants were made to respond to different questions cutting across accusations of favouritism in policy-making, technical difficulties, Data-conservation among several others. 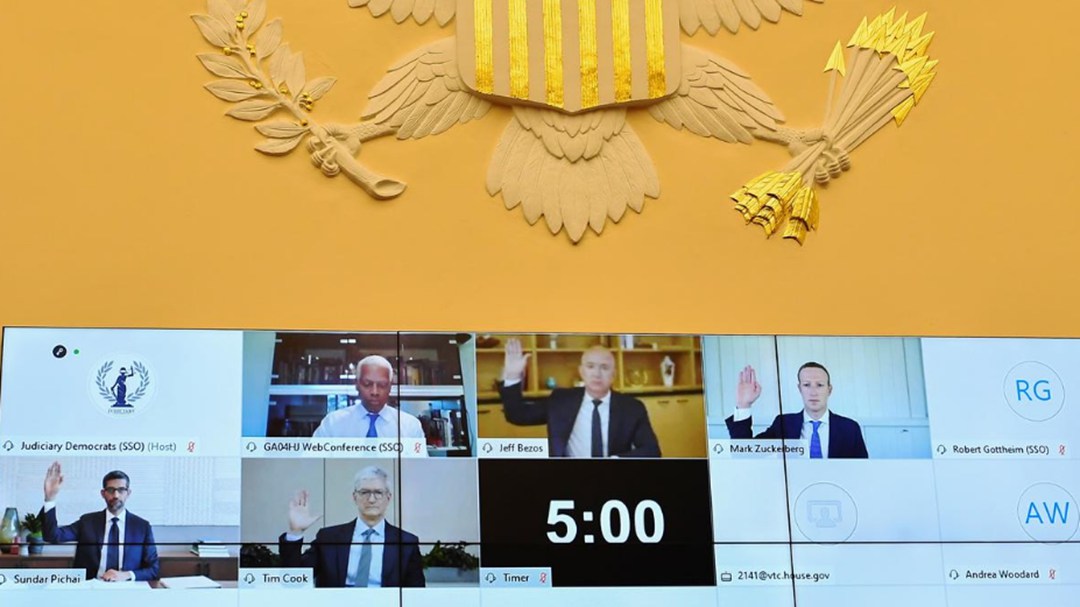 The hearing which lasted for hours kicked with a situational briefing by the Congress Chairman, Mr. David Cicillin who also advised that all preventive measure put in place to curb the spread of the COVID-19 including the active wearing of face mask must be thoroughly adhered to by congressmen who were present at the hearing.

The chairman went ahead to table all allegations made against the big four, most of which had to do with Industry dominance, data conservation and policy breaching. According to him, millions of pages of evidence have been provided to the congress subcommittees by over 100 market participants, giving them a clear direction for the hearing.

In addition to that, hundreds of hours of interviews were also conducted with the affected parties which cut across different sectors including Innovation, entrepreneurship, data privacy, press, and independent businesses in the online market, most of which testified against the big fours.

Buttressing on the main purpose of the hearing- the dominance of the big fours, the congress chairman revealed that Amazon runs the largest online market place in America, capturing up to 70% of the entire online market place sales, thanks to its very large business scale which cut features, e-commerce, cloud computing, movie production among several others. The tech giant recently recorded an overall valuation of more than $1.5 trillion.

Apple is a dominant smartphone maker with over 100 million iPhone users in the US alone. The smartphone maker also offers a variety of services cutting across, financial services, media and games.

Facebook, on the other hand, the social media giant was addressed as the world’s largest provider of social networking services. And despite a lot of court charges related to digital scandals, with record-breaking fines, the tech giant has continued to rake in massive profits with over $18 billion recorded during last year alone.

lastly, Google is the world largest online search engine, capturing more than 90% of the services online and controlling key technologies, and the digital market. The tech giant enjoys a wild range of user base up to 1 billion across 6 of its products including browsers, smartphones, and digital labs.

According to the congress chairman, the dominance among the big fours, became even more prominent and stronger than ever before only in the wake of the COVID-19 which has forced more activities to take place online than offline. Consequently, the tech giants has been able to accrue a significant boost in their revenue flow, even though tons of other businesses are experiencing their worst crisis till date.

Mr. Cicilline further sheds more light on how the decision made by the big four could adversely influence the democracy of the country, giving their stronghold on the economy, mostly because “their business modules are so central to the modern life”.

The big four also share a common ground in the following areas:

With the aforestated, it is important to call the big fours to check because of the negative impact their adverse dominance is causing smaller scale businesses, individuals, and the economy in general. In a simpler term, the congress chairman described the situation with the tech giants as a case of having “too much power”.

Speaking of having “too much power”, the chairman of the four community, while addressing the congress told that the meeting which was partially hosted virtually would not have been possible without using one of their product which in this case appears to be Google Meet- a videoconferencing app which also indirectly collects users data.

In their defence, each of the tech giant chief executives shared a similar argument- that they all still face an intense competition even in the global market.

Streamlining down to the individuals, Facebook CEO was more concerned about re-echoing the fact that it has not been in the practice of breaching any app hosting platform’s user privacy policy as the congress seem to have it as their strong point of argument. 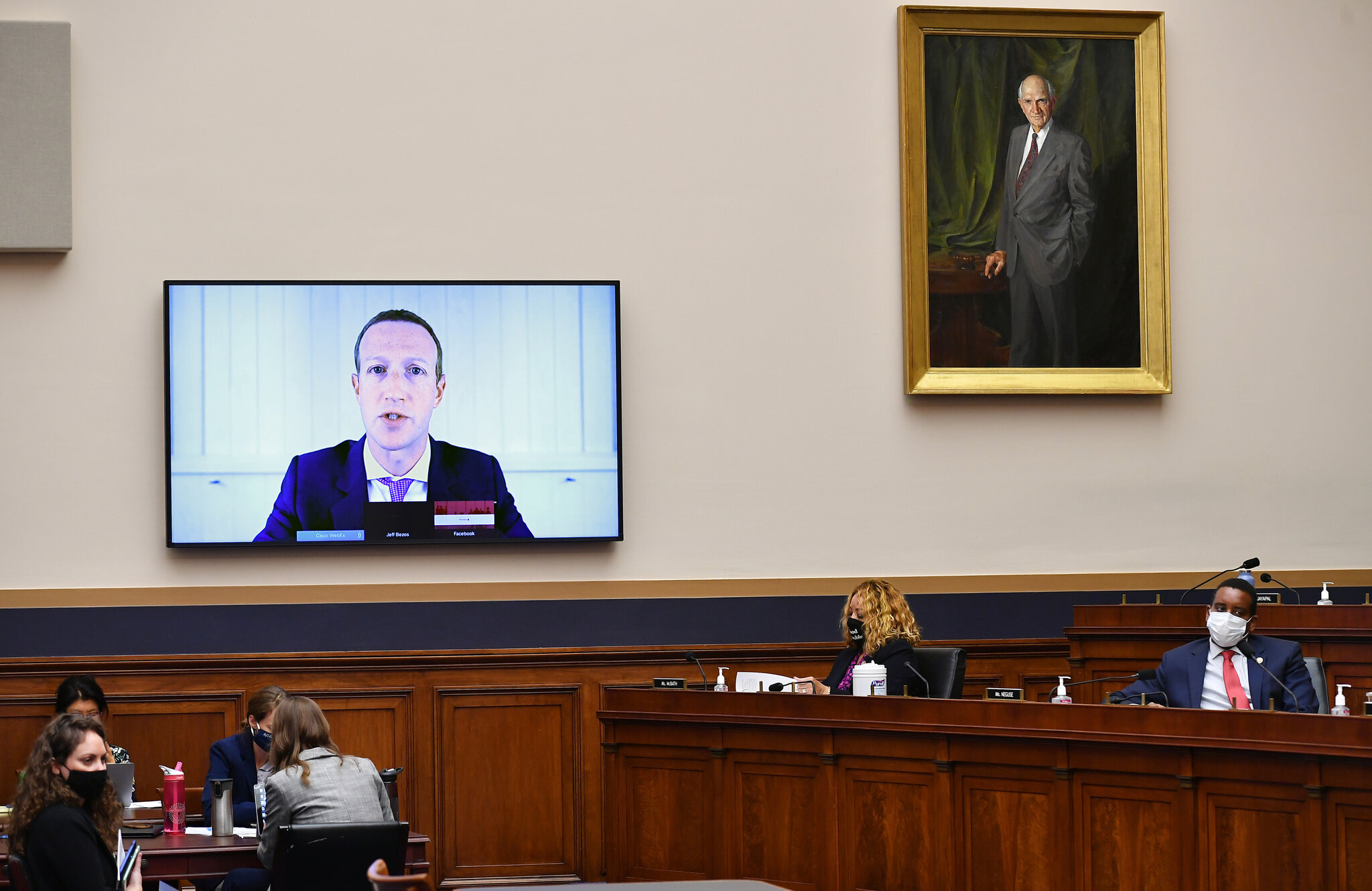 Facebook also has to defend itself against claims of impelling data collection from its users and competitors using some of its product including Onavo- an Israeli mobile web analytic company that was acquired by the social networking giant.

According to the congressmen, the app and some other apps belong ing to FAcebook was pulled out of Apple App store over violation of privacy policy that addresses data collection. On the contrary, Facebook claimed that it was the one responsible for the pull-out to address the need of the then revised policy by Apple.

Jeff Bezos seems to be the most attractive one during the hearing as the congressmen directed most of the questioning to him. 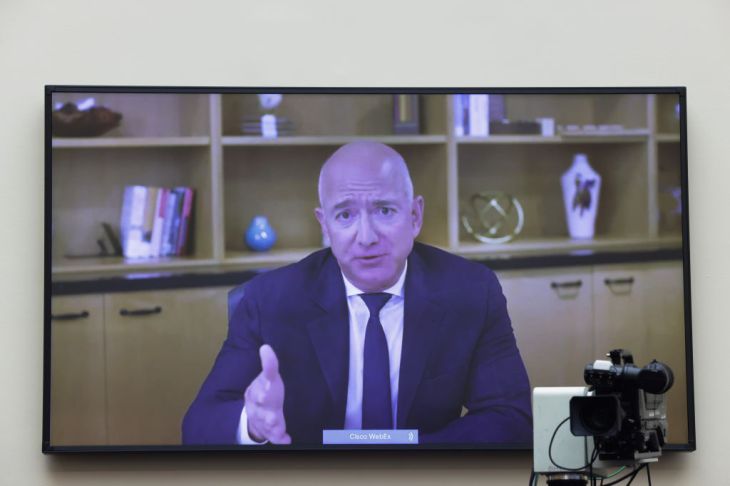 Among the notable moments, Bezos when asked whether Amazon ever used third-party seller data to make business decisions, responded that he could not exactly guarantee that such information collected from third-parties were ever used to launch any of its own “private-label option”

In addition to that, Amazon declared that it is a global player and not to its immediate region alone, and if that’s the case, it is important that the congressmen realize that it is rather a small player in the global retail market, accounting for “less than 1% of the $25 trillion global retail market and less than 4% of retail in the U.S.”

Coming down to its local competitors, Bezos claims that it focuses on Walmart, “a company more than twice Amazon’s size,” and also names newer competitors like Shopify and Instacart.

In its own defence too, Sundar Pichai also emphasizes the increasing competition it faces in the global market which cut across services beyond search engines. Admittedly, he might be the leading and most used search engine platform, however, it claim there are a lot of rivals which does not require its services like Amazon’s Alexa, Twitter, WhatsApp, SnapChat, and Pinterest as alternative sources of information. He added that consumers turn to e-commerce sites like Amazon, eBay and Walmart for information about products.

And talking about the big ad figures, Pichai explained that it has had to split its revenue with other services including Twitter, Instagram, Pinterest, Comcast and others, as advertisers now have “an enormous amount of choice” in terms of platforms. Consequently, its advertising cost dropped by 40% over the last decade.

While that was worthy of a point, it still doesn’t stop the fact that Google still remains one of the world’s most dominating platform.

Apple CEO, Tim Cook, in his defence, address the misconception about unfair App Store commission structure. According to him, most of the apps had to pay zero-commission at all, while some are required to pay between 15 to 30 per cent, based on “specifics of their particular situation”.

He further affirmed that developers were all treated in like manner and that Apple wouldn’t raise commissions, because it had to compete for developer interest in its platform as well, exactly as its immediate competitor, Google Play Store.

In the same direction as Bezos, Cook’s statement also argues that Apple’s ecosystem has helped create jobs. Adding that the app store currently hosts over 1.7 million apps out of which only 60 of them were developed by Apple, and “more than 1.9 million American jobs in all 50 states are attributable to Apple.” This contradicts the congress’ opinion that the big fours are responsible for individual job losses, as well as creating an unfavourable ecosystem for startups.

While the hearing seems to round up without so much accountability, the congress chairman rounded up the session by stating as a fact, that all the tech big fours have, in one way or the other, established a monopoly power, some of which has to be broken.

To learn more about the previews of Google, Facebook, Amazon and Apple’s opening statements Check on the House Judiciary Committee’s site.

With most of the questioning interwoven, especially given that Apple App Store is a hosting platform for